Not the Demise of Civilization 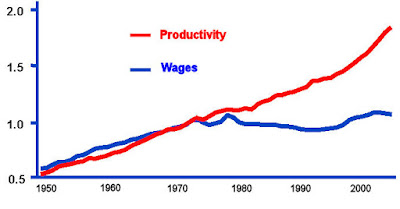 In a sea of hot button issues surrounding everything from the economy to climate change to energy policy, another polarizing issue has been lurking - only occasionally rearing its head - that is sure to draw significant attention in the coming weeks. That issue is the Employee Free Choice Act (EFCA), or, as it is known among its detractors, "card check".

Recently, Fox News' Neil Cavuto has gone after Stewart Acuff of the AFL-CIO over EFCA (rather unsuccessfully, I might add); CNN's Lou Dobbs has insisted the legislation would eliminate the secret ballot for workers considering unionization; and mere days after receiving $25 billion in taxpayer money, Bank of America hosted a conference call on which Bernard Marcus, co-founder of Home Depot, frothed that the Employee Free Choice Act was "the demise of ... civilization."

So what, exactly, has got corporate America and its cheerleaders so wound up?

In a nutshell, EFCA is intended to transform a union organizing process that is currently protracted, contentious and dominated by attorneys, into one that is a simple matter of getting a majority of employees to sign union cards. In addition to this “card check” or majority verification, EFCA includes provisions that are designed to prevent employers from weeding out or pressuring workers once they have selected a union, including automatic mediation after 90 days and treble back pay for the discriminatory firing of labor organizers. In short, the primary purpose of the Employee Free Choice Act is to make organizing workers easier.

There are certainly plenty of honest questions about whether that is a desirable thing - and we'll get to what I consider the most important in a bit - but the level of hyperbole, suspiciously new concern for worker privacy rights, and outright propaganda emanating from the EFCA's opposition is notable for its venom. So, before we proceed, let's take a look at a few of the claims that have been made against EFCA. (Or you can read the text of the bill itself using the link in the first paragraph):

MYTH: The Employee Free Choice Act abolishes the National Labor Relations Board (NLRB)'s "secret ballot" election process.
FACT: EFCA does not abolish the NLRB election process. Instead, it gives workers the additional choice to form a union through either an election or through majority sign-up. Majority sign-up has been a path to union representation since 1935, but workers may currently only use this process if their employer agrees. The Employee Free Choice Act puts that decision solely in the hands of employees, and a secret ballot remains available if 30% of the affected workers request one.

MYTH: The National Labor Relations Board’s “secret ballot” election protects workers’ democratic rights.
FACT: Secret ballots alone do not guarantee fair elections. Under an NLRB election, employees have no rights to free speech or protection against intimidation from supervisors. They are regularly forced to attend anti-union meetings and one-on-one interviews with their managers where they are pressured to reveal their position on unionization. By contrast, labor organizers are not allowed to set foot on company property. While there is nothing wrong with secret ballots or with management voicing its views on unions, the problem lies in the abuse of management power in the period between initial union card signing and the NLRB-sponsored secret ballot election.

MYTH: The EFCA would require public union card signings.
FACT: Under current law, employees must already sign cards or petitions saying they support a union in order to obtain an election. Further, when an employer agrees to a majority sign-up process, employees must sign cards to show the union's majority status. Union authorization cards under the Employee Free Choice Act are treated no differently than petitions for election or majority sign-up cards today.

MYTH: The Employee Free Choice Act will encourage intimidation and harassment by labor unions against workers.
FACT: Workers report much less pressure from all sides during majority sign-up campaigns than with NLRB elections. However, it's important to remember that unlike employers, union organizers can’t terminate employees, cut wages, or deny promotions. A recent report from the Center for Economic and Policy Research (CEPR) found that more than one quarter of all union election campaigns were marred by illegal firings.

MYTH: The EFCA requires a secret ballot election for workers to get rid of a union they no longer want.
FACT: Under current law, no election is necessary to disband a union, and the same would be true under the Employee Free Choice Act.

MYTH: The Employee Free Choice Act requires mandatory arbitration that will make businesses uncompetitive.
FACT: Even though workers may choose to form a union, employers often stall when it comes time to negotiate the first union contract, and current law provides no incentive for either party to come to an agreement. Under the EFCA, either employers or employees may request mediation from the Federal Mediation and Conciliation Service if an initial contract agreement has not been reached within 90 days. No reasonable arbitrator will force conditions on a business that will cause it to close its doors, but if an agreement cannot be mediated, the dispute is referred to binding arbitration. All time lines can be extended by mutual agreement.

Clearly then, there is a significant disinformation campaign underway against the Employee Free Choice Act. But even if these means are corrupt, are they justified by the desired ends? Should we be worried about a resurgence in organized labor, which has dipped to only 12% of the workforce? Haven't unions been the downfall of the American automobile industry, and don't they decrease productivity? Aren't unions a drag on national prosperity?

There is very strong evidence that the answer to all of these questions is "no."

Take for instance the claim that unions cripple productivity. This first graph shows the percentage of workers represented under collective bargaining in eight industrialized countries. The United States is unquestionably the least unionized of these nations.

This second graph depicts the growth of worker productivity between 1979 and 2005. If union penetration were correlated to diminished productivity, we would expect the U.S. to have far and away the highest productivity growth. Instead, what we see is that it is smack in the middle of a wide range of results, indicating that there is little relationship between unionization and productivity. (If anything, the most unionized nations appear to have the strongest productivity growth.)

This conclusion is supported by the performance of key economic indicators in the decades after World War II, as described in the charts below. (Click each chart to enlarge. Originals here.) The strongly unionized economies of the Eisenhower, Kennedy and Johnson Administrations were at least as successful - if not more so - than those of presidents in later years. 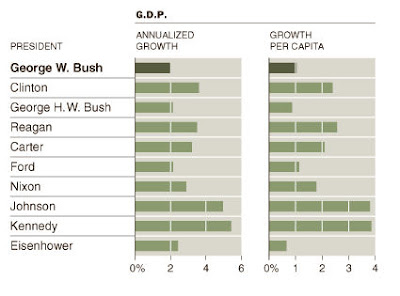 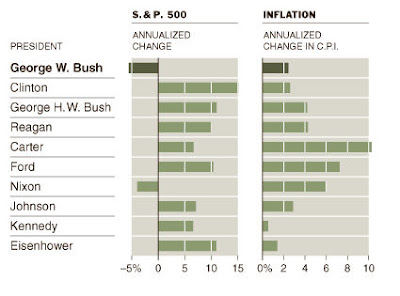 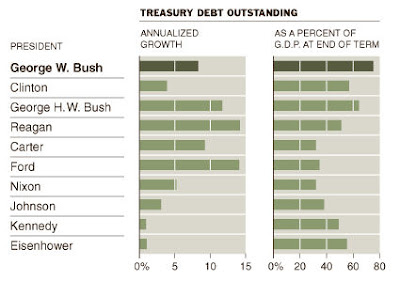 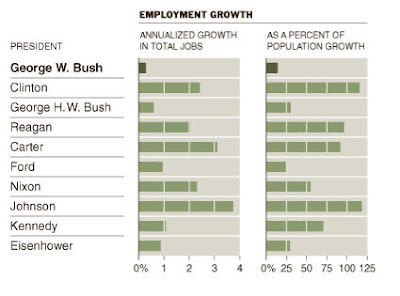 Likewise, the punch drunk state of the American car industry - whose leadership has made any number of poor strategic decisions (Can anyone tell me, for instance, why the Buick brand still exists, but why leadership in electric vehicle technology was simply tossed aside?) - can't be laid at the feet of unions. Labor costs amount to just one tenth of the cost of building a car, and despite claims from the right wing that U.S. auto workers are paid $75 an hour, wages at the Big Three are actually on par with those earned by Japanese auto makers.

Perhaps most importantly, the Employee Free Choice Act appears to be a viable tool to help address the underlying economic problems that created the current financial crisis, and ensure that the recovery is both fair and sustainable. Forty prominent economists, for instance - including three Nobel laureates - recently signed a statement (pdf) supporting the enactment of the Employee Free Choice Act as “a critically important step in rebuilding our economy.”

As the current recession has demonstrated, economic growth cannot be sustained on credit; it must come from real wage growth, which in turn drives consumption. Ensuring that workers have the freedom to bargain collectively is an effective way to once again reward rising productivity with higher wages, a sensible link that has largely disappeared over the past 30 years. (See graph at the top of this post.) Letting the people who produce economic value share in the success they create is not only the right thing to do, it will reinvigorate the beleaguered American middle class.

If there are legitimate concerns about the Employee Free Choice Act, its opponents have yet to produce them, instead relying on not only cheap exaggerations, but outright lies. To my mind, the politics of division are far more likely to bring about "the demise of civilization" than letting workers more easily obtain collective representation in the workplace.
Posted by PBI at 8:43 AM

The current system is so wonderful for workers. The Smithfield Company (the largest pork production company in the country) is finally 'organized' after a 16-year campaign and 3 elections. But the story is much worse.

At the beginning, employees did the usual card-check (they had over 65%). It took a lawsuit and intervention by the NLRB to get the company to schedule the election. In the meantime, they fired over one hundred workers, most of them black, and brought in Hispanic workers (hmmm?) to replace them. When the vote was finally held, it failed. No surprise there.

The union kept on, and in 2000, were successful in convincing a majority of the now mostly Hispanic work force to fill out their cards for an election. The next thing that happened was all these people were suddenly the focus of ICE raids, arrests, and detentions. What a surprise. More lawsuits followed, an election was held again, which of course failed. Again.

The union organizers did not give up. In 2007, they got another majority card-check. The company responded by pressuring employees to identify the union organizers and then several of them were beaten up and then arrested on complaints by the company that they had instigated the violence. More lawsuits, and an election was held again. This time the workers voted in favor of a union.

But it's not over. They are now in that place where the company is refusing to negotiate with them.

I just wish we could get some of the bobble-heads in the media to call out the lies when they are spouted by the jerks opposing EFCA.


Sensen No Sen is published approximately once a week.

Sensen No Sen is a concept from Japanese martial training, or budo, in which an opponent is countered in the split second before he has moved physically, but after he has mentally committed to an attack and cannot change course.

Rational, fact-based thought and discussion, leavened with occasional bursts of passionate discourse. Topics include government, politics, current events and anything else that seems important at the time.